Reflections on the Trump Administration’s Legacy

The Philip Merrill Center for Strategic Studies at Johns Hopkins SAIS and Duke University’s Program in American Grand Strategy co-hosted the third annual conference on civil-military relations on 7 and 8 April 2021. The conference, supported by the America in the World Consortium, a dynamic partnership of schools seeking to create a more vibrant debate about America’s role in the world, highlighted student voices to examine the legacy of the Trump administration.

During the conference, student panelists and moderators sat alongside national leaders from the government, military, and academia. Experts tackled issues such as political polarization of the military and increasing partisanship, while examining civil-military relations in context of national-level movements and crises as well as a presidential transition. The conference ended with a discussion on how cyberwarfare is shaping the future of civil-military relations and the unique role of the private sector.

Although the conference took place over Zoom instead of the traditional Washington, DC location, a year of virtual learning prepared the student planning team to collaborate across borders. Four graduate students, competitively selected from Johns Hopkins and Duke Universities, led the conference from beginning-to-end. Empowered by faculty mentorship, the student planning team sought to foster scholarly debate and uplift student voices despite the challenges of COVID-19 restrictions. In addition to the panels, the conference included a graduate student essay contest with cash prizes and a civil-military relations book page for student attendees.

Marc Losito, a Master of Public Policy Candidate at Duke University and Army Warrant Officer, won first place in the essay contest for his piece on elected civilian oversight of military cyberwarfare. Losito analyzes legislation and policies from post-9/11 to today, arguing for increased civilian oversight of military activity in the cyber domain and the establishment of an interagency approval process supported by cyberwarfare norms. Runners-up confronted issues between the civilian public and the military, advocating for a greater understanding between the two populations.

During closing remarks, Dr. Paula Thornhill, Acting director of the SAIS Merrill Center, reiterated a question that came up repeatedly, “Who is a civilian?” She said, “I think of myself as a civilian…but I’m a retired one-star [General], maybe I’ll never be a civilian.” Personal reflection on one’s own role and experience in civil-military relations is arguably as significant as scholarly debate. Regardless of whether attendees have served in the military, in civilian government, or neither, one common theme remained present: the need for sustainable trust in American civil-military relations and need for civilians and military alike to be at the table working together. 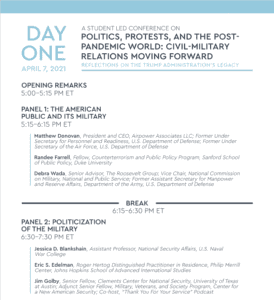 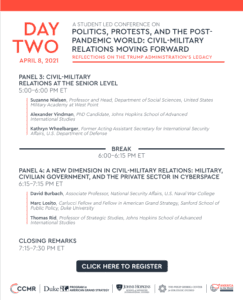